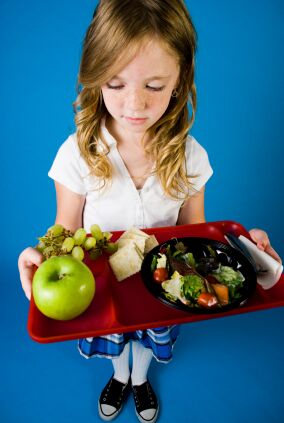 Students from a Kansas high school are speaking out against Michelle Obama's school lunch reforms, which restrict calorie counts at public schools in order to combat childhood obesity. But their hunger pangs seem to be symptoms of picky eating, more so than an actual lack of sustenance. (ABC News)

While childhood obesity is on the rise, there still are children who are underweight or undernourished. 2009 graduate, Casey Seidenberg, shares how they can healthfully put on a few pounds. (Washington Post)

2005 graduate Dawn Lerman also is in the news, continuing her “Fat Dad” series for the New York Times. This week? Finding “joy in holiday recipes.”

Scientists across the globe have harshly criticized the methods of a recent French study suggesting a strong link between GMOs and cancer, but the Russian government isn’t taking any chances. The country’s decision to to block the importation and use of American GM corn may be dramatic, but it also may be a sign of things to come. (Daily Mail)

If you think your innate sense of portion control is reliable, think again. Researchers have shown that we consume more of a serving of food when it sports a smaller "size" label. (NPR)

Over the past few months, a debate has broken out about anti-obesity ads. Which ones are motivating versus simply shaming? The most recent controversy concerns the influence of overweight parents on their children's choices, as dramatized in a recent Minnesota ad campaign. (NPR)

After months of drawn-out drama, Congress will ultimately not vote on the 2012 Farm Bill before its September 30 expiration date. It could be further postponed in November, meaning that the already complex issues in the bill might not be addressed until fall of 2013. (Civil Eats)

1 in 6 Americans who lose weight gain it back within a year. Even for those who keep weight off, the possibility of being "skinny fat" has been raised by fitness and health professionals. So what if we started changing our diet, not for our physical appearance, but for the longer-term goal of our health, inside and out? (NY Times)

We all have heard that we need eight hours of sleep for optimal health and performance. But few of us get more than six hours of sleep at a time, begging the question, should we rethink our approach to sleep? (NY Times)

Go-go gadget: scientists have created tiny electronic devices that fulfill a medical function in the body, then dissolve after their work is done. The new technology may also have implications for sustainable technology outside of medicine. (Time Healthland)

Adding milk to your tea may hinder our absorption of flavonols - plant compounds that provide a range of health benefits. So consider taking your next cup au natural. (NPR)

A conventional farmer featured in the 2009 film Food, Inc. is speaking out on behalf of food labeling advocacy groups. He says it's a simple question of "supply and demand," citing that more than 50 countries already require GMO countries, so it's "not a big deal." (Civil Eats)