Integrative Nutrition has such a strong, powerful female population. Today, as we observe International Women’s Day—a “global day celebrating the economic, political and social achievements of women past, present and future”—we toast women everywhere for their strength, beauty, and desire to stand up for what’s right.

As you may know, International Women’s Day dates back to the turn of the 20th century. On the heels of the Industrial Revolution, women began to rise up against the oppression and unfair treatment they experienced in the workplace and society at large. Campaigns for equal rights and women’s suffrage gathered more and more support, and in 1908, a massive group of “15,000 women marched through New York City demanding shorter hours, better pay and voting rights.” (Left Image Courtesy of International Women’s Day)

Two years later, the International Conference of Working Women voted to commemorate the spirit of this march with an annual celebration set on the same day every year—and so International Women’s Day was officially born! In 1911, the holiday spread to countries including Denmark, Germany, Switzerland, and Austria, and received an outpouring of support; 30,000 women demonstrated, and “village halls were packed so full that male workers were asked to give up their places for women.”

The spirit of International Women’s Day lies in people banding together and working harder than ever to improve labor conditions, wages, safety, treatment, and rights for female workers. And although the struggle started over a century ago, these ethics still hold true today as women continue to fight for full gender equality.

International Women’s Day is celebrated around the world, and much headway has been made, but we’re not there just yet. To see a snapshot of some of the major advances (and lingering setbacks) in the women’s movement, take a look at this infographic. 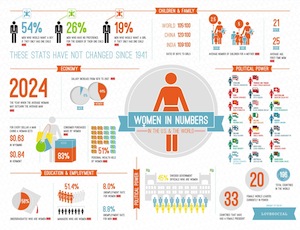 How would you like to see women advance in the future?